Everything in the right place

From the Greek words "topo" meaning "place" and "ology" meaning "study", topological optimisation is the study of mathematically optimising material layout. When approaching a component part in this way, the end goal is to remove superfluous material in areas of low stress whilst maintaining structural integrity of the whole; the lighter and stronger the better.

You could think of it as being like a game of Jenga. The objective is to remove blocks in low stress areas, that aren't contributing to the overall strength of the structure, whilst maintaining the tower's core shape. 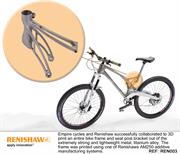 With traditional methods of manufacturing, such as subtractive and formative processing, topological optimisation has to make certain compromises. For example, if a part is created by machining, material layout has to compensate for tool access. If a part is created by casting or moulding, considerations must be made with regard to opening the mould and removing the part. These manufacturing constraints limit the design freedom.

However, additive manufacturing (AM) doesn't suffer from the same limits. As a result of building the part up layer-by-layer, more complex designs are possible with no need for tooling or cutting. Therefore forms can be created that are closer to the optimum design.

When Chris Williams, managing director of Empire Cycles first contacted Renishaw, he had already produced a full size 3D printed replica of his bike in plastic. However, he desperately wanted the components built in a stronger but still light-weight material. We did our research and originally agreed to optimise and manufacture the seat post bracket only.

Designs for the bracket were originally drawn up using CAD (Computer Aided Design). Using this design as a basis the fixed points and loads were input into the topological optimisation software. Much like the Jenga analogy the software splits the problem down into a number of blocks or finite elements, this simplifies the calculation of internal stress and strain. A series of iterative steps are then run, each one removing material under the least load. Using this method the software evolves the most efficient design for load bearing.

This was then remodelled in CAD, and subtly optimised for build using Renishaw's applications expertise. By eliminating many of the downward facing surfaces, areas that would otherwise have needed wasteful support structures were removed.

The final piece was produced in titanium alloy on a Renishaw AM250 laser melting system. This was both light weight and strong; much stronger than our Jenga tower and 44% lighter than an aluminium alloy bracket. A mass-reducing design such as this also ensures a quicker and cheaper build.

The seat post bracket was then tested using the mountain bike standard EN 14766 where it withstood 50,000 cycles of a 1,200 N force (equivalent to a 19 stone rider). This was then repeated to six times the standard without failure. Needless to say, we were incredibly pleased with the results.

Because the seat bracket's design, build and tests were so successful, we then decided that 3D printing the whole frame was a practical goal. In time for the December 2013 Euromold exhibition, Renishaw and Empire Cycles were the proud parents of the world's first 3D printed metal bike frame, which weighed in 33% lighter than its brother - the original aluminium model.

Without using topological optimisation techniques for the seat post, it would not be as light as it is. Titanium alloys are denser than aluminium alloys, with relative densities of around 4 g/cm3 and 3 g/cm3 respectively. But titanium (Ti6Al4V) has more than three times the ultimate tensile strength (UTS), allowing thinner wall sections to be used.

It was only by significantly altering Chris' original design, removing any material not contributing to the overall stability of the part, that mass was reduced whilst maintaining strength.

Without additive manufacturing, such a design would have been impossible to produce. Traditional methods would not have been able to handle the complexities of the topological optimisation features, such as thin walls and hollow structures, which resulted in a lighter, stronger and more economical build.

And so, having mastered the bike, the only question left now is, what shall we optimise next?

The GreenTeam initially opted for aluminium wheel carriers, but it soon became clear that only a combination of a force-optimised design with less material, and a light material with a very high tensile strength, such as titanium, could further reduce the weight of the wheel carrier. “Compared with previous aluminium wheel carriers, Renishaw was able to save a total of 1.5 kg in vehicle weight, enabling the lightest vehicle so far.” Renishaw GmbH (Germany)

Support structures are necessary for the majority of additive manufacturing builds. They anchor the build and dissipate heat, allowing overhanging parts of the structure to be built up layer-by-layer. The wheel carriers were additively built using Renishaw's AM250 additive manufacturing system using minimal supports, which are easily removed post build.

The need for support structures may seem wasteful, however in traditional subtractive machining the ratio of material needed to produce a finished part such as this can be as high as 19:1. With additive manufacturing that ratio is closer to 1:1, in this case 1.12:1.

Renishaw provides a design review service to anyone considering Renishaw's laser melting systems as a production solution. Your component or assembly will be reviewed by Renishaw's applications engineers who can make recommendations on DfM (Design for Manufacture), digitally process the model, and build a sample component using one of its on-site AM250 systems. A pre-build report, inspection report, and component price estimate can also be provided on request.

Empire Cycles is a unique British bike designing and manufacturing company in the North-West of England. Passionate about using great British engineering to create elite products, the Company offers innovative designs to the world's mountain bikers and downhillers.

By working together, Renishaw and Empire Cycles optimised the bicycle design for additive manufacture, eliminating many of the downward facing surfaces that would otherwise have needed wasteful support structures.