Meltham Mills Engineering (MME) has adopted a new inspection philosophy to control their manufacturing, which has brought significant time savings. It now takes only eight minutes to inspect every critical feature on a typical component, compared to four hours previously – 30 times faster.

Simultaneously, data is gathered on the form of features, the first time MME has had this automated capability. This has been made possible using Renishaw's SP25 scanning probe fitted to a new Mitutoyo Crysta co-ordinate measuring machine (CMM), allowing continuous measurement data to be captured along 3D profiles.

The purchase of this new measurement equipment is one result of MME's strategic review of its overall manufacturing operation, which is transforming a traditional machining company into a business better placed to meet the demands of a rapidly changing market. MME is not only reducing costs but also adding value where customers need it, and achieving faster response times and sustained levels of quality. MME has a long history of producing gears and associated components but have realised that new technology and thinking must be used to remain competitive, but used cost-effectively, not just for the sake of it.

Traditional inspection methods are very good at measuring the size and relative position of a feature, but the performance of a component in use is often determined by any deviation in shape or surface profiles. With gears, if the correct profile is achieved the teeth will mesh correctly, resulting in smoother running and less wear. Therefore having the ability to rapidly measure the form of the teeth profiles and feedback any variation to control the process has significant benefits.

MME now believes strongly in having capability in-house for all the processes involved in gear production. The forgings are bought in at very competitive prices from overseas with all subsequent operations, the real value-added processes, closely controlled.

Turning is done first, followed by gear cutting, milling, heat treatment, grinding and final inspection. Between each of these production processes the relevant features are subject to sample inspection on the CMM, carried out by the machine operators themselves. This is an important change in working practises; the operators take full ownership of the quality of their work, with traceability back to a calibrated standard via the CMM.

MME is also a specialist in heat treatment, and currently uses the SP25 to scan the component form to determine how much grinding is required after this process. MME also plans to use the SP25 to provide customers with information that predicts the changes taking place during heat treatment, which can then be used to redefine the machining tolerances prior to treatment, reducing distortion and waste, and reducing overall cost.

Nigel Peace, the production engineer responsible for these changes, has been given the role of Process Control Co-ordinator, demonstrating how MME views inspection and quality control as the control system for the whole manufacturing process.

Mr Peace programs the CMM using CAD models, where available, creating programs where the measured points and motion of the probe stylus is visualised on a 3D CAD model. This programming is done such that the machine operator can run through a series of step-by-step instructions, positioning the component in the right place on the machine bed, then running the rapid inspection cycle in a matter of minutes. The operator must use a specific password to start running the job and any measured data is automatically recorded against the specific component and batch.

The inspection program immediately produces a plot of measured points, showing the deviation from the nominal line of the gear profile, and how that deviation compares to the upper and lower tolerance limits set by MME and its customers. Machine operators can see immediately whether there are any imperfections along the length of the gear surface, or indeed any other critical surface.

Nigel Peace is delighted with the new CMM and probe system – “This system is taking measurements we couldn't even dream of before. We used to subcontract out the inspection of any difficult component, which cost a fortune and added days, if not weeks, to the overall production time. Our manual CMMs and shadow-graphs were capable of less complicated measurements but still took hours compared to the minutes taken now.” 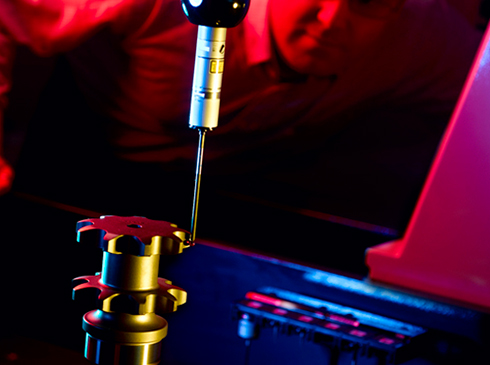 How the Renishaw SP25 works

The Renishaw SP25 is different from the original Renishaw touch trigger probes such as TP2 and TP6, fitted to thousands of CMMs worldwide. It is a miniature 3 axis machine in its own right, capable of measuring the deflection of the stylus tip in any 3D direction.

The CMM is programmed to drive the stylus tip of the probe across the surface of the part, maintaining a constant probe deflection normal to the surface. If this deflection changes, the software adjusts the direction of travel to regain the constant deflection. At the same time, data is gathered at a rate of up to 2000 points a second, both from the three axes of the probe and the three axes of the CMM. This continuous stream of data would be impractical to gather using touch trigger probes.

A key feature of the SP25 is the ability to change between different styli during an automated cycle, which MME uses during the measurement of a number of parts. The different styli are mounted on modules with repeatable mounting joints, so that when the modules are attached to the probe body, the ball on the end of the stylus is back in the same position to within a fraction of a micron of the position in the which the ball was calibrated.

Modules are changed several times during certain inspection cycles, so that, for example, a longer stylus can be used to access the lower teeth of a double gear, or a smaller ball used to measure a small diameter hole. The time to change between modules is a matter of seconds using the automated change rack.