Sir David McMurtry, Renishaw's Chairman and Chief Executive, will receive The Daily Telegraph Award for a Decade of Excellence in Business at the 2013 National Business Awards. 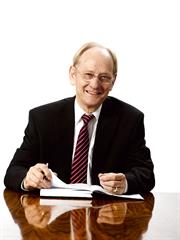 Sir David McMurtry, Renishaw's Chairman and Chief Executive, will receive The Daily Telegraph Award for a Decade of Excellence in Business at the 2013 National Business Awards, to be held at London's Grosvenor House Hotel on Tuesday 12 November.

Nominated by the National Business Awards' Advisory Board, he will receive this prestigious award recognising the business personality who best represents achievement and longevity. Synonymous with their business sector in the UK, the award acknowledges the winner's sustained achievements within the business community during a distinguished career. Previous winners of this award include Lord Wolfson, CEO, Next and Terry Leahy, CEO, Tesco.

Sir David McMurtry began his career at Bristol Aero Engines as an apprentice. The company was later bought by Rolls Royce, where his breakthrough came when he created the first ever touch-trigger probe - which led to him starting his own business Renishaw, with co-founder John Deer. Now at the age of 73 McMurtry has been at the helm of Renishaw for 40 years, with the company now employing 3,300 people and reaching the FTSE 250.

Tim Jotischky, Head of Business at Telegraph Media Group said: "Sir David McMurtry is a very worthy winner of The Daily Telegraph Decade of Excellence Award. He exemplifies all that is best about British engineering and innovation and during 40 years at the helm of Renishaw has also proved himself a very astute businessman. He is a self-effacing figure, who does not seek the limelight, so Renishaw's remarkable story has seldom been told. We are delighted that the award will bring wider recognition to an outstanding British business and, in particular, Sir David's role in training a new generation of engineers".

John Pethica, Physical Secretary and Vice-President of the Royal Society said: “He (Sir David) is one of the greats of his area. He represents all the best values – exceptional technical quality and scientific leadership.”

Next week will see Sir David acknowledged for his achievement in front of 1,200 business leaders, entrepreneurs, politicians and media representatives, along with winners of another 16 categories amongst over 150 finalists. Now entering their 12th year, the National Business Awards connect the UK's professionals through its annual ceremony and year-round thought leadership and round table events.