Renishaw's Chairman honoured as a 'Master of Manufacturing' 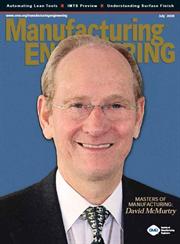 The official magazine of the US Society of Manufacturing Engineers (SME) has granted its respected ‘Master of Manufacturing’ accolade to Sir David McMurtry, Chairman and Chief Executive of Renishaw plc, the first time that this recognition has been given to a non-US citizen. The special July 2008 issue of ‘Manufacturing Engineering’ features an extended interview with Sir David, who is only the seventh person to receive this honour which recognises ‘an exemplary life and career in manufacturing’.

An exemplary life and career in manufacturing

Introducing the honour, Brian Hogan, the magazine’s Editor said, “Persons who imagine manufacturing to be a dead end should consider McMurtry’s career. When fashionable athletes and entertainers and politicians have gone into history’s dustbin, the devices and techniques introduced to manufacturing by these Masters will be meeting human needs all over the world.” Past Masters of Manufacturing include Joseph Engelberger, the ‘father’ of robotics, and Richard Morley, ‘father’ of the programmable logic controller.

In preparation for the special feature, Manufacturing Engineering’s senior editor, Patrick Waurzyniak, flew from Michigan to Renishaw’s head office in Wotton-under-Edge, Gloucestershire,UK, to interview Sir David, who spoke at length about his early years as a craft-grade apprentice with then Bristol Aero Engines Ltd, through to the formation of Renishaw, and its subsequent success as a world leading metrology company. He noted that his “claim to fame” was that he attended Dublin’s Mount Joy School, now Mount Temple, where rock band U2 were formed, and that when negotiating with Rolls-Royce for a patent license for the original touch-trigger probe upon which Renishaw’s fortune’s were built, that his then boss told him to ‘forget it and go back to doing something useful’!

Full details can be found in the pdf of the Manufacturing Engineering article (see 'Article' opposite), for which permission has been kindly granted by SME, subject to their copyright terms which are highlighted opposite and also published at the end of the article.