Renishaw’s Chairman honoured by the Institute of Measurement and Control

Sir David McMurtry, Chairman and Chief Executive of global engineering company Renishaw, has been awarded the Callendar Medal by the Institute of Measurement and Control. 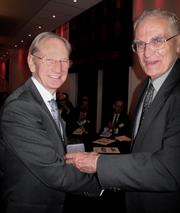 Sir David McMurtry, Chairman and Chief Executive of global engineering company Renishaw, has been awarded the Callendar Medal by the Institute of Measurement and Control. The award, which commemorates renowned physicist Professor HL Callendar FRS, is presented annually to an engineer or scientist who has made a significant contribution to the art of instruments or measurement. Sir David was honoured at a special ceremony that took place at the home of the Worshipful Company of Scientific Instrument Makers in London, during October 2013.

This year's Callendar Medal recognises Sir David for ‘his outstanding contribution to the art of instruments and measurement', including his invention of the world's first touch-trigger probe which ‘revolutionised the development of co-ordinate measuring machines', and his leadership of ‘the design and development of hundreds of other measurement and inspection devices for the metrology industry and for the growing healthcare sector.'

The award citation also states that ‘his contributions to UK industry have been considerable', and that the value of his inventions can be illustrated by their commercial viability, which have lead to Renishaw becoming a FTSE listed company with annual sales in excess of £340 million and 3,300 employees.

Speaking about the award, Ben Taylor, Renishaw's Assistant Chief Executive, says, “This award gives further recognition of Sir David's immense contribution to measurement technologies which benefit manufacturers globally. He is not comfortable being in the limelight, but I know that he is very pleased that awards such as these put a positive focus on both Renishaw and the manufacturing sector.”

Founded in 1944 and incorporated by Royal Charter in 1975, The Institute of Measurement and Control is committed to promoting the professional excellence of engineers and technologists at all levels in the automation, instrumentation, control and related industries.

Sir David McMurtry has received significant global recognition for his career achievements including honorary doctorates from leading UK Universities, Fellowships from the Royal Academy of Engineering, the Institute of Mechanical Engineers and the US Society of Manufacturing Engineers (SME), and in 2011 he was elected as a Fellow of the Royal Society, the UK's national academy of science. In 1989 he became a Royal Designer for Industry, in 1994 was made a CBE “for services to Science and Technology”, and in 2001 was appointed a Knight Bachelor “for services to Design and Innovation”. In November 2013 he was also awarded The Daily Telegraph Award for a Decade of Excellence in Business at the UK National Business Awards.