Renishaw's bespoke corporate Christmas card has for many years been a festive mystery, and this year the design process took a different approach, with students from a selection of local secondary schools asked to create a winning design that will be seen around the world. The competition was won by Rhiannon Street, a 15 year-old pupil from Stroud High School, who received a £100 Amazon voucher for her impressive advent calendar style representation of Renishaw's iconic 19th Century headquarters building.

The competition was open to school years 7 – 13 (age 11 – 18) and the students were invited to use any medium available to them in the design, be it a sketch, computer generated drawing, watercolour, photography or even using textiles. The only condition was to maintain the tradition of featuring Renishaw's mill building as part of the design. 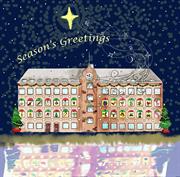 The entries received took advantage of this opportunity for creativity, and a wide range of designs were entered. Rhiannon's winning entry won plaudits from the judges, who were impressed with its innovative design and attention to detail which shows the mill building's many windows filled by a variety of festive characters.

Rhiannon was presented with her prize at Renishaw's New Mills headquarters on 2nd of December by Chris Pockett, the company's Head of Communications. Speaking about her winning entry she said, “I'm really proud that my design will be seen by over one hundred thousand Renishaw's customers around the world, both as a printed card and as an animated e-card which the company has created.”

Renishaw would like to thank all the local schools that supported the competition and the students that took time to submit entries.