SYMÉTRIE is one of the world's leading providers of hexapod solutions for positioning and motion applications. A hexapod is a type of parallel robot, also known as a Stewart platform, with six linear actuators (jacks) and six degrees of freedom (X, Y, Z, pitch, yaw and roll). SYMÉTRIE hexapods consist of a lower platform (base), upper platform (mobile platform), and 6 linear actuators with inline ball-screw drives. A ball and universal joint connects each strut to the base and mobile platform, respectively. The upper platform supports the payload and can be mounted in both vertical and horizontal orientations. Typical applications for hexapods include: flight simulation, materials testing, microscopy / telescopy, aeronautics, scientific research and many others.

We chose Renishaw's RESOLUTE absolute encoders because of their high level of metrology performance. These absolute encoders work reliably in high vacuum conditions. Moreover, the encoder scale is made of low expansion ZeroMet material, which makes our hexapods less sensitive to temperature variations. Thermal stability was a critical requirement for these space optics projects.

A 1600 (L) x 1200 (W) x 1000 mm (H) bespoke hexapod was designed for the Flexible Combined Imager (FCI) on the four imaging satellites ordered by the European Space Agency (ESA). The FCI will provide full images of the Earth every 10 minutes in 16 spectral channels and comprises a scanning mirror, telescope and Spectral Separation and Detection Assembly (SSDA) that includes four filtering detectors with optics. SYMÉTRIE's GICS hexapod is intended to aid the ground-based calibration and testing of the SSDA using six-degrees of freedom and a translational placement accuracy of ±0.1 μm. The instrument is designed to split incoming light into 5 discrete spectral groups; four of these are Near Infra Red (NIR) or IR optical beams. During testing and calibration, a source assembly (coloured purple in figure 1) directs light into an ‘optical assembly' inside the mobile platform of the hexapod. The optical assembly subsequently processes this light and illuminates the field of view of the SSDA which is located in front of the exit pupil. The hexapod is used to provide precise and highly accurate registration between the exit pupil of optical assembly and the SSDA input aperture.

This smaller-scale 725 mm (L / W) x 650 mm (H) hexapod is intended for vacuum applications down to 10-6 mbar and was specifically designed for the ground-based calibration and testing of the Interferometry Assembly Detection Electronics Assembly (IA DEA). This is positioned in front of the Infra-Red Sounder (IRS) instrument on the sounding mission satellite and allows in-flight characterisation of the optical and radiometric performance and subsequent adjustment of various instrument elements. The IRS will provide an unprecedented source of information for the operational services in National Weather Centres and regional / global Numerical Weather Prediction. This instrument, based on a Fourier Transform Infra-Red Spectrometer, operates at millimetre wavelengths and comprises a scan mirror, front-telescope, interferometer, back telescope, cooled focusing optics and detectors. SYMÉTRIE's hexapod supports a single black-body and IR source for ground testing and calibration of the IA DEA prior to launch. Both IR sources, including targets for the reproduction of standard test patterns, are mounted on an X-Y translation table atop of the hexapod. The function of the hexapod is to precisely orientate the IR sources and optics, with respect to the IA DEA, with a translational accuracy of ±0.1 μm.

RESOLUTE with BiSS® protocol offers SYMÉTRIE advanced capabilities that continue to support new developments in its ground-breaking hexapod products. From aeronautics and space to synchrotrons and scientific research, hexapods are frequently used in many diverse industries and provide a uniquely versatile motion-control platform.

Advantages of RESOLUTE in hexapod applications include: 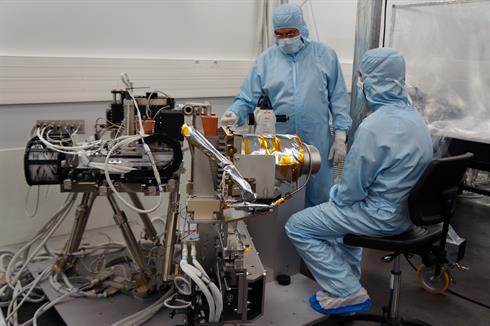 SYMÉTRIE is a leading hexapod manufacturer based in Nimes, France. Hexapods are used to position an object in space following the 6 degrees of freedom with high accuracy, resolution and stiffness. SYMÉTRIE has significant experience in large-scale technological projects such as The MegaJoule Laser, James Webb and Gaia space telescopes. In recognition of its expertise, SYMÉTRIE was awarded the French national metrology prize of 2007 by the French College of Metrology (Collège Français de Métrologie).

Renishaw's close working partnership with SYMÉTRIE supports the delivery of advanced hexapods that meet the stringent requirements of the space industry. Future collaborations will continue to drive the product innovation strategy of both companies.